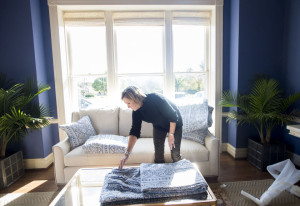 Last week, there still were finishing touches to be done on Lynchburg’s first Design House.

On Nov. 13, designers popped in and out throughout the day, moving in furniture, hanging curtains, cleaning — all in anticipation of this weekend.

“I knew I’d be crazy to take on bookcases,” said Beverly McCloskey, the designer in charge of making over the home’s library. “I still need at least 120 books.”

Lynchburg Design House, located at 3128 Rivermont Ave., opened yesterday for tours that will continue through Dec. 13, with ticket sales benefitting the YWCA of Central Virginia and its programs.

The unique fundraising concept has been employed in other locales across the country, including Richmond and Charlottesville.

It’s simple: Local designers work together to make over an entire house, which is then opened up to the public for tours and seminars, with ticket sales raising money for a charitable organization. Lynchburg Design House’s opening preview gala was held Friday, with tickets going for $75 a pop, also to benefit the YWCA.

Each designer is assigned a room and can do whatever they want in the space, within reason, donating their time and materials.

Richmond’s Designer House has been around since the 1980s and is held every other year to raise money for the Richmond Symphony, while Charlottesville’s benefits Shelter for Help in Emergency, a domestic violence shelter, and averages about 2,000 visitors, said Beth Doucette, former YWCA board president and a member of the Design House steering committee’s executive council.

In Lynchburg’s case, the Design House is for sale, making for a mutually beneficial relationship among all involved.

“The owner gets his house exposure because he wants to sell it,” said Kimberly Morey of Reddy Real Estate, which is selling the house. “For the designers, what better advertising than to have people tour a room you’ve done? And then all the proceeds go to the Y.”

Designers also can sell out of the rooms, with a portion of proceeds going to the YWCA, and the farmbasket has set up a holiday boutique in the carriage house out back.

The home’s location, in a prime spot on Rivermont Avenue near Virginia Baptist Hospital, also made it a fitting choice, organizers said.

“It’s a very visible house,” said Caroline Hudson, the Y’s executive director. “That’s what makes it so exciting and such a good opportunity.”

The process began in early fall, when Morey and Wendy Reddy approached local designer Moyanne Harding about putting together some renderings of what a remodeled kitchen and bath would look like in the house.

“[Harding said] ‘We should do a Design House for the Y in Lynchburg,’” Doucette said. “That’s when we got a crash course in Design House.”

The home’s owner, Jimmy Atkins, agreed and “we had just enough time to try to pull it off,” Reddy said last month, when the house was still in the early stages of its metamorphosis.

At the beginning of September, organizers invited a group of more than a dozen local designers to tour the house. Those who were interested in participating submitted a list of the rooms they wanted to tackle for the project, and the committee got to work matching designers to their desired rooms.

“We got every square inch covered,” Morey said “We even got someone to do the porches.”

In all, 15 individuals contributed their work to the house, a mix of interior designers, landscapers, contractors and more — with help from their staff, as well as friends and family.

“We actually live a couple blocks down,” she said in mid-November, as she and her husband worked on a room. “It was really exciting to see this big gem of the neighborhood being transformed.”

Janelle also took on the role of the project’s photographer, so she’s been keeping track of each room more closely than most.

“Getting to follow the process through, of photographing the before and doing in-progress shots of things moving in, I feel like I got a front row seat.”

Janelle said she was going for a relaxed feel in her room, an upstairs bedroom. Design elements include a cowhide rug from Moore & Giles, a lamp made from a salvaged camera tripod and a tufted headboard.

“This is a really grand home, but I didn’t want this room to feel fussy or pretentious,” she said.

Downstairs, Elizabeth Harrington said she was going for the same vibe in the front parlor, which now boasts blue walls that play off the curtains’ blue-and-white printed fabric, which is repeated on throw pillows and a bench.

“I decided to make it a little … more casual,” she said. “I think everybody has done the same thing, toned it down, [made] it more approachable.”

A breakfast nook toward the back of the house is full of modern touches, including gray-and-white leopard-print wallpaper and a ceiling that’s been painted bright red.

There’s even a man cave downstairs, designed by Pastiche at Main owner Haley Pavao, with a full bar and several of Pavao’s signature light fixtures.

Across from Harrington’s room is another parlor that was converted into a dining room, and behind it is the library, which is home to those huge built-in bookcases that had McCloskey on her toes last week.

“It’s been a fun process,” she said. “I’m always up for something that’s for charity.”

Throughout that process, the significance of the project wasn’t lost on those involved — that designers spent the past few months working on a house to raise money for an organization that gives women a home when they need it most.

“It’s such a good metaphor for what we do,” Hudson said. “We’re about transforming lives.”

The Art of the Party: Fun Get-togethers Start with Good Planning, Attention...